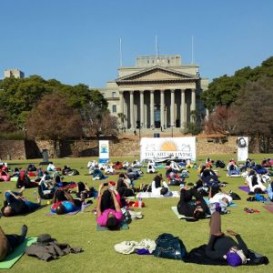 From conflict-ridden areas to corporate skyscrapers to the devotional space, yoga has brought together the whole world in a spirit of unity never seen before. From delivering a glimpse of inner peace to over 3700 people in the capital city of the conflict-ridden Manipur to Mumbaikars – who performed yoga at the Marine Drive undeterred by the rain; From 7000 Art of Living teachers & volunteers joining the Prime Minister at Rajpath to taking this ancient practice to the Indo-pak border at Hussainiwala: The Art of Living marked the celebrations with unique events across the globe, reinforcing that yoga is truly universal.

While India took the lead, The Art of Living volunteers from 132 countries across the globe marked the first-ever International Yoga day with equal fervor. As Paris added a unique twist to the day by practicing yoga on boats across the river Seine; Nepal rose with the world to yoga in front of their iconic Pashupatinath temple. China too joined in with over 500 students exploring yoga at the Peking university. Many countries like Russia, South America, UAE, Germany, Indonesia, Malaysia, Thailand, Singapore, Japan, Kuwait, Jordan and Sri Lanka contributed with their enthusiastic participation. Multiple cities in Russia, South America, Europe, Africa and Asia took to celebrating the day with a lot of zeal and passion.

“Yoga is something that can unite people across the globe, across nations, across religious divides. Everyone can come together with the spirit of togetherness, belongingness. Yoga is not just about asanas only, it’s a state of mind where you have a sense of belongingness, sense of responsibility for the whole planet, and a sense of connectivity and harmony. This is one thing which can unite and bring solace to people across the world. What we need is humanness and humanness can blossom when people are free from stress and tension and depression,” says Sri Sri Ravi Shankar, founder of The Art of Living who has been working for the spread of yoga since 35 years.

As the keynote speaker, Sri Sri will preside over the UN celebrations of the International Day of Yoga at the UN headquarters in New York.
India’s minister for external affairs, Sushma Swaraj, UN Secretary General, Ban-ki-Moon will also be present at the event.
In a separate event later today, Sri Sri will also address 5500 New Yorkers at the Lincoln center on the topic: ‘Yoga – a New Dimension’

The embracing of yoga around the world is a warm testimony to yoga’s unique international phenomenon.