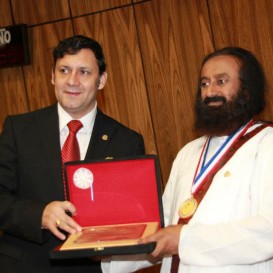 In a rare and unique ceremony, Sri Sri was honored with the highest civilian award of Paraguay – the National Order of Merito de Comuneros. The award has only been bestowed on two other recipients in the parliament’s 200-year history.

“I dedicate the National Order of Merito de Comuneros highest civilian award of Paraguay, to all those who work for non-violence, honesty and compassion,” said Sri Sri.

In addition, Universidad Autonoma de Asuncion of Paraguay conferred the Doctorate Honoris Causa on Sri Sri on September 13, in recognition of the humanitarian work done by The Art of Living.