Citizens of Kolkata turned out in thousands to welcome the Art of Living Founder, Sri Sri Ravi Shankar on April 8th, 2014. Sri Sri interacted and addressed more than 10,000 enthusiastic volunteers that morning, in Netaji Indoor Stadium. They had worked dedicatedly for the Volunteer for Better India (VBI) Campaign with the aim of raising public awareness for exercising one’s vote. VBI drives have been conducted in corporate, housing societies etc in Kolkata & surrounding areas. Volunteers even conducted ‘Voteathon’, an inter-college competition aimed at increasing the importance of voting in our civil society, especially amongst the youth. ‘Nukkad nataks’ and bike rallies were also organized. The efforts put in resulted in 3,912 new voter registrations.

Later that evening, Sri Sri led a meditation and interacted with the public on various issues confronting the country. His words instilled a sense of responsibility and nationalism amongst all. 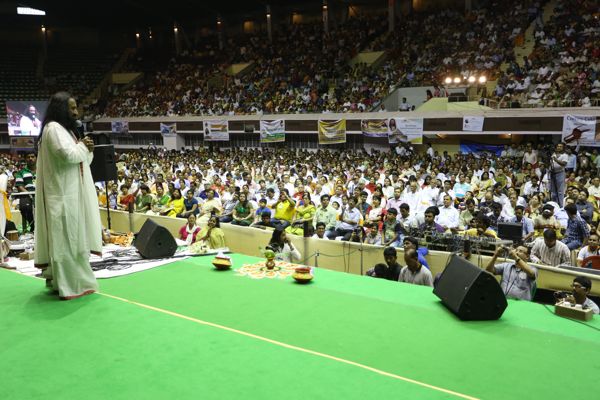