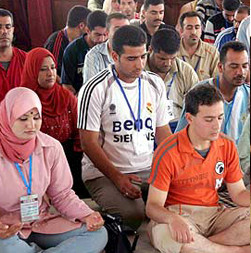 I have this crazy idea… a world without violence. If we could instill pride in being non-violent, in being compassionate, in being helpful to others, our lives will take a new direction. And this  should be our unwavering commitment.
~ Sri Sri Ravi Shankar

According to Sri Sri Ravi Shankar, achieving lasting peace begins with the individual. His unique approach, which involves self-development programs, dialogue and rehabilitation, has had a positive effect in numerous conflict and post-conflict countries all over the world. His programs and peace initiatives reach every section of society, working to transform hate and violence into peace and joy.

Sri Sri played a key role in ending a bloody 53-year old war between FARC, one of the largest left wing guerilla movement, and the Colombian government. The armed conflict that had killed 200,000 people, ended with a peace treaty between the FARC and Colombian government on September 26, 2016 in the presence of Sri Sri Ravi Shankar. Below is a timeline of the interventions by Sri Sri in the peace process.

June 2015: Sri Sri Ravi Shankar meets President Juan Manual Santos and is awarded the Simon Bolivar Order of Merit, the country’s highest civilian honor, by the House of Representatives. During his meeting with the President in Bogota Sri Sri promised, “I would do everything that is in my capacity to bring peace to all.”

June 2015: During his three-day visit to Cuba on June 28 2015, Sri Sri had several rounds of discussions with the FARC leadership and convinced them to embrace the Gandhian principle of non-violence. The FARC had then agreed to speed up the process.

July 2015: FARC declares the unilateral ceasefire on July 6 2015 and finally agrees to embrace the Gandhian principle of non-violence. This is the only ceasefire that continued for one year and later transformed into a bilateral and definitive ceasefire. FARC commander Ivan Marquez later acknowledged the influence of Sri Sri’s teachings in the ceasefire declaration.

August 2015: Sri Sri Ravi Shankar invites former prosecutor of the International Criminal Court, Dr. Luis Moreno Ocampo, to Havana for a meeting with peace delegation of FARC led by Ivan Marquez. The objective of the meeting was to analyze and address the issue of justice in the context of a peace agreement.

September 2015: Art of Living teachers teach breathing techniques and meditation for managing emotions to members of the FARC peace delegation.

March 2016: President Juan Manuel Santos sends his greetings and acknowledgments during Art of Living’s 35th Anniversary; Says,“Sri Sri Ravi Shankar and The Art of Living are heroes of peace.”

June 2016: Peace delegation FARC leader Iván Márquez thanks Sri Sri Ravi Shankar & Art of Living for Colombian peace initiative. “With the help of Sri Sri, we have placed our spirit to achieve reconciliation and coexistence of a big and benevolent country, whose destiny can’t be that of the war. The teachings of The Art of Living are essential to achieve a stable and long-lasting peace,” said Ivan Márquez, who is now leader of the newly launched 111-member political party that replaces the former FARC.

June 2016: The Colombian Government and the FARC announce the bilateral and final ceasefire thus putting an end to armed clashes

August 2016: The peace agreement between the FARC and the Colombian Government is completed. President Juan Manuel Santos calls for a plebiscite.

August 2016: Her Excellency Ms. Monica Lanzetta Mutis, Ambassador of Colombia to India acknowledged,” In the framework of the historic peace agreement reached on the 24th of August this year by the Government of Colombia and the FARC – EP, Colombia reiterates its profound appreciation for the valuable contribution of Sri Sri Ravi Shankar to the process.”

September 2016: The Art of Living facilitated a meeting between the FARC leaders and the families of those kidnapped and killed by the guerrilla group. During this meeting, families of the deputies expressed their suffering to the perpetrators who said, “Today with sincere humility, we would like to publicly recognize our responsibility and ask for forgiveness.” The meeting ended with the families and FARC leaders holding hands and praying. Art of Living’s efforts to fly victims to Havana for a forgiveness program was important in turning the tide for the referendum in Colombia. “It was a big step for FARC leaders to acknowledge & ask for forgiveness. This is the power of meditation,” Sri Sri said.

September 2016: Sri Sri Ravi Shankar attended the signing of the final agreement in Cartagena, Colombia and meets with different players in the conflict. After the event, President Santos told Sri Sri: “Thank you for everything you have done for the peace process. You have been a great support and friend of this process. All your help is very useful and your spiritual guidance is so important and I’ll be grateful forever.” Describing it as a moving moment for the people of Colombia and FARC Sri Sri said the accord gave peace a chance.

October 2016: No option triumphs in the Plebiscite on the agreement. Sri Sri invites Colombians to continue their efforts and not lose hope for peace.

December 2016: Sri Sri was in Colombia again at the invitation of the Colombian government to take the reconciliation process forward.

Having completely given up arms FARC has now relaunched itself as a political party in Colombia. Gurudev was invited as guest of honor at the launch program on 26th August, 2017 in Bogota and was represented by Swami Paramtej and Art of Living teacher Fransisco Ocampo. Thousands of delegates including former commanders Ivan Marquez, Rodrigo Londono and Pablo Catatumbo were present at the program. The Farc leaders shared,  “Meeting Sri Sri and the Art of Living was truly a ​miracle. We will show that we will fulfill the promise we made to him to follow the Gandhian principle of non-violence,” a former commander, now political leader, declared. “We are very grateful for the support given by Sri Sri Ravi Shankar and the Art of Living to achieve peace and reconciliation. It was very important to us,” he added.

On May 22, 2007, Sri Sri met with Iraqi Prime Minister, Nouri Al-Maliki, making him the first Indian Spiritual Leader to travel to Iraq as an Ambassador of Peace. Since September 2003, more than 5000 people in Baghdad, Basra, Suleymania and Karbala have participated in the Art of Living Foundation’s Trauma Relief program.

In August 2007, the collaborative effort between The Art of Living and the Iraqi government resulted in 55 Iraqis undergoing a month-long training at the The Art of Living International Center in Bangalore, India.

There are now 50 Art of Living instructors and 150 registered volunteers in the country.

In 2005, the Foundation launched the Iraq Women’s Empowerment Program, which has benefited an estimated 500 Iraqi women. The project, which is gaining increasing popularity in the community, provides self-development programs and vocational training to Iraqi women.

In 1999, following decades of civil and economic strife, The Art of Living Foundation and IAHV began conducting workshops for trauma relief, health and hygiene in Cote D’Ivoire

In April 2009 when the Sri Lankan civil war was at its peak, Sri Sri became the first spiritual leader to visit the war-torn country, providing both relief materials and spiritual solace to thousands  in the Vavuniya District displaced by war.

Since the year 2000, Sri Sri’s humanitarian and rehabilitation initiatives have benefited thousands of Kosovo residents, including 500 nurses, doctors, psychologists, psychiatrists, and social workers employed in Mental Health Centers across Kosovo.

Based on their positive experiences, the Ministry of Health has recommended that all the Mental Health Workers in Kosovo participate in Art of Living workshops, and be trained to teach the Breath Water Sound Program, a workshop designed for victims of trauma.

In the last decade, Sri Sri’s relentless efforts have transformed more than 11,000 naxalite militants and terrorists in Andhra Pradesh, Bihar, Chattisgarh and North East India and Trauma Relief programs and Youth Leadership Training Programs have been conducted for victims of the violence.