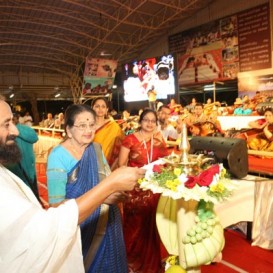 70 Veena artists plucked​ their instruments in a symbolic gesture for peace and harmony on December 12 at the Art of Living International Center​. Titled ‘Naad Tarang, the symphony had​ artists from different backgrounds united in their love for music and their belief that music spreads peace.

Hosted by The Art of Living, the event was another addition to the many music and dance symphonies which the organisation has been associated with in the past.

Sri Sri Ravi Shankar, the founder of Art of Living says, “Music is that rhythm and harmony that flows from the universal to the individual; from the cosmos to the finite. Spirituality and music together can uplift people, get them out of depression and help them start a new life with enthusiasm. For a stress-free life, you have to embrace both these facets – spirituality and music”.

Speaking about Naad Tarang, Dr. Suparna Ravishankar, Secretary, Ranjini Kalakendra said​, “The inspiration behind this idea was The Art of Living’s ‘Brahm Naad’ event in 2008 that brought 1094 sitarists on one platform for the first time in the world. It led me to realize that we need to create platforms not only to uplift practitioners of ancient arts but also enhance exposure of Indian classical music.”

Dr. Ravishankar played an instrumental role in getting the 70 artists together for the event, including maestros like Smt. Shanti Rao, Shri Prashanth Iyengar, Rudrapatnam Brothers, Shri Pramod & Shri Prashant, and Smt.Emani Kalyani. Vidushi Neela Ramagopal was amongst the dignitaries present at the event.

Over the last few years, The Art of Living has organized many music and dance events, many of which have also been acknowledged by the Guinness committee.

Artistes coming from different religions, castes and sections of society have performed together in previous concerts including the Naadha Vaibhavam  where 5,000 Carnatic musicians performed in unison in Chennai;  Antarnaad which saw 2,750 Hindustani classical vocalists in an enchanting spectacle in Pune; Brahm Naad where 1,094 sitar artistes from across the country mesmerized audiences in New Delhi and the Silver Jubilee celebrations of the Art of Living foundation where 3500 musicians performed together for the first time in Bangalore.

“The Veena program was a curtain-raiser for the grander event in March”, shared Dr. Manikantan, Director, Art of Living Academy of Performing Arts.

The stage will be set on fire yet again with the passion of artists from around the world at the ‘World Culture Festival’ to be held in New Delhi from March 11-13, 2016.

The World Culture Festival 2016 is a celebration of The Art of Living’s 35 years of service, humanity, spirituality and human values. The festival will celebrate the diversity in cultures from across the world while simultaneously highlighting humanity as One World Family. 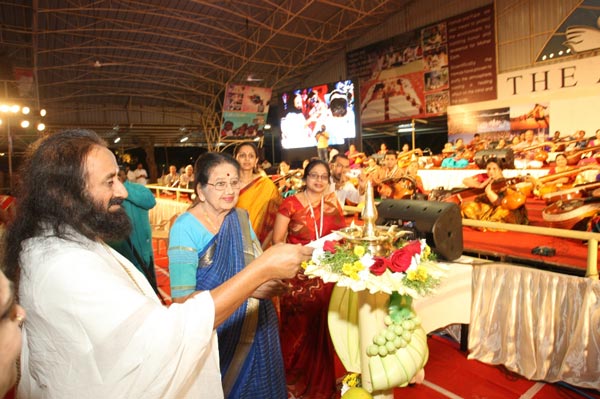 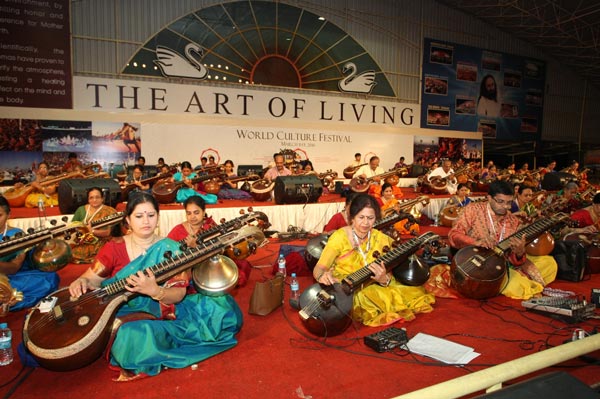